In the roughly seven months since my last real post I’ve moved halfway around the world – literally – to China, where my partner and I now work at Nansha College Preparatory Academy. Of the many, many interesting things about this new experience is the fact that our new school uses standards-based grading (SBG) – at the secondary level. What we’ve found is that although our faculty are committed to it, it’s a challenge to make practices of SBG meet the potential promised by its philosophy. 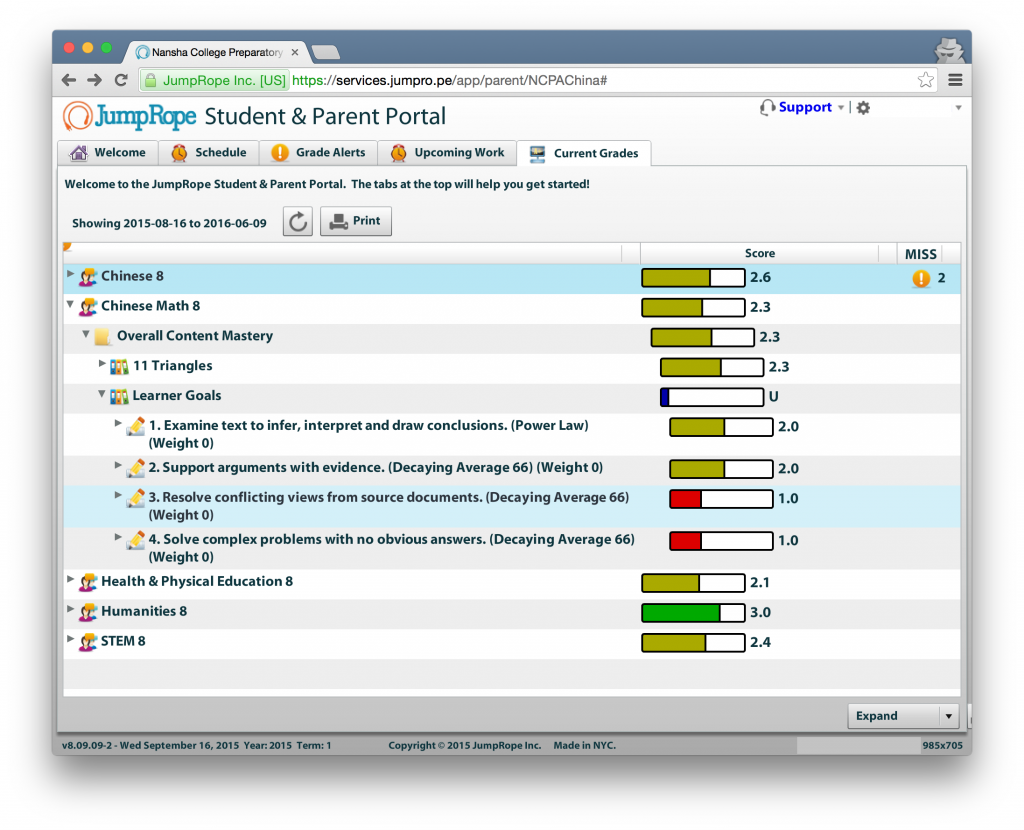 Since standards-based grading explicitly assesses and reports on standards, I like to think of it as removing the need for translation. Let’s take the example of a test that is meant to measure three different standards. For fun, we’ll call them “basket weaving,” “harp plucking,” and “horn tooting.” Under a traditional grading system, a teacher would count the number of correct answers and turn that into a numerical score – say, 84%. The problem is that this figure of “84%” is not terribly useful for parents, students, or teachers in knowing how students need to improve. It further defines the question about student learning: students ask “how do I get to an 87%?” instead of “how do I make my writing more succinct?” Even though a rubric may be used to arrive at that score, that rubric is usually only available to the student and teacher – not the parent – and is discarded once the assignment is complete. During the reporting period and indeed during any parent and student communication, the teacher needs to then articulate what that 84% means: is the student strong at basket weaving but weak at harp plucking and horn tooting? Or some other combination? Or is the issue effort? This is what I mean by translation – the process of embedding standards into an assessment, which is then converted to a single numerical score, which is then communicated back into feedback about how the student needs to improve: three distinct steps. One of the advantages of SBG is that instead of the “84%,” our example assessment would have a score of student performance for each standard separately. A student might thus receive a “Proficient” in basket weaving and “Approaching” for the other two, making it clear where the student can improve. There are only two steps, since the standards are directly assessed instead of going through the intermediate step of being converted to a single numerical score. In both cases, a rubric is still necessary to explain how the student can improve in those specific standards.

Standards-based grading is meant to correct the perceived deficiencies of traditional grading and specifically “the inappropriate use of averages.1” Proponents say that SBG gives grades meaning since they are tied to explicit learning objectives; makes expectations clear; shifts the focus to learning rather than maximizing a numerical score, thereby facilitating intrinsic rather than extrinsic motivation; reduces paperwork; and helps teachers plan effective instruction. Marzano tells us that SBG has the most potential for “significantly improving student achievement,2” although I haven’t seen a study that demonstrates this (Hattie’s research doesn’t address it). From what I’ve read, this prediction is based on the fact that feedback has proven effective in improving student achievement, and SBG is supposed to improve feedback, and therefore SBG should improve – a transitive association. In a nutshell, SBG should create an environment where more learning occurs and where students, parents and teachers are more aware of that learning.

In order to accomplish these goals, schools need to implement numerous measures that move away from the reporting models teachers are used to.3 One important condition is reducing the number of standards “dramatically…by about two-thirds.4” These standards will also need to be strongly vertically and horizontally aligned. Then, throw out grade averaging.5 Ideally, teachers should look at student performance on standards across several assessments and decide what the mark is. The mark on a standard should be updated throughout the term to reflect their best work and thus their proficiency,6 with the implication that students be allowed to redo work in order to demonstrate a higher level of proficiency. Change the way marks are assigned to a four-level scale per Marzano (although alternate schemes do exist). Change the number and type of assessments that are graded into the gradebook; only summative assessments should count towards a student’s score. Finally, change the format of report cards and transcripts to reflect the emphasis on standards and not on numerical indicators.

If this sounds simple, it is – in theory. In reality, the implementation of it at NCPA has been met with challenges as teachers and students struggle to internalize this new way of thinking – and that’s not unexpected given the newness of both the system and the school. Nonetheless, it’s worth examining how both the mechanisms of standards-based grading as well as its fundamental assumptions have been working at NCPA so that other schools may be able to apply our lessons there. Stay tuned.